Come meet today’s change-makers at our Grand Prairie stage right in the heart of the festival!

From the Think Tank stage – our ideas lab designed in partnership with Le Monde – to the startup incubator in association with Kiss Kiss Bank Bank, WE LOVE GREEN is more determined than ever to shine the spotlight on all those exploring sustainable development opportunities looking to wow, inspire and guide us. They’ll be sharing essential practices, from innovation for the future and sound ideas for today.

The question: Why is the ecological transition not happening fast enough and on a larger scale?

Solutions: thinkers and doers will come show all the changes currently taking place all across the globe!

The climate, biodiversity, pollution…. Each new day brings a new disaster and new scientific research calling for urgent action. The reaction: heads of states appear ineffective, struck by inertia, paralysed by lobbies and faced with a double bind of public opinion. It’s already too late, as climate refugees are already living in a state of emergency. Inspired by Swedish 16-year-old Greta Thunberg’s determination, students all across the globe are zealously calling for action with their school strikes. For the first time in history, the human race is conscious that it’s playing with its own survival – and that of the planet’s too.

However, individual and collective initiatives are on the increase, coming up with ways to fight against global warming, biodiversity loss, land artificialisation and resource depletion… On 1 and 2 June, Le Monde’s editorial team along with WE LOVE GREEN will evaluate and explore solutions to the environmental crisis and help bring ideas to life by reconciling social and environmental concerns and drawing possibilities for the future. 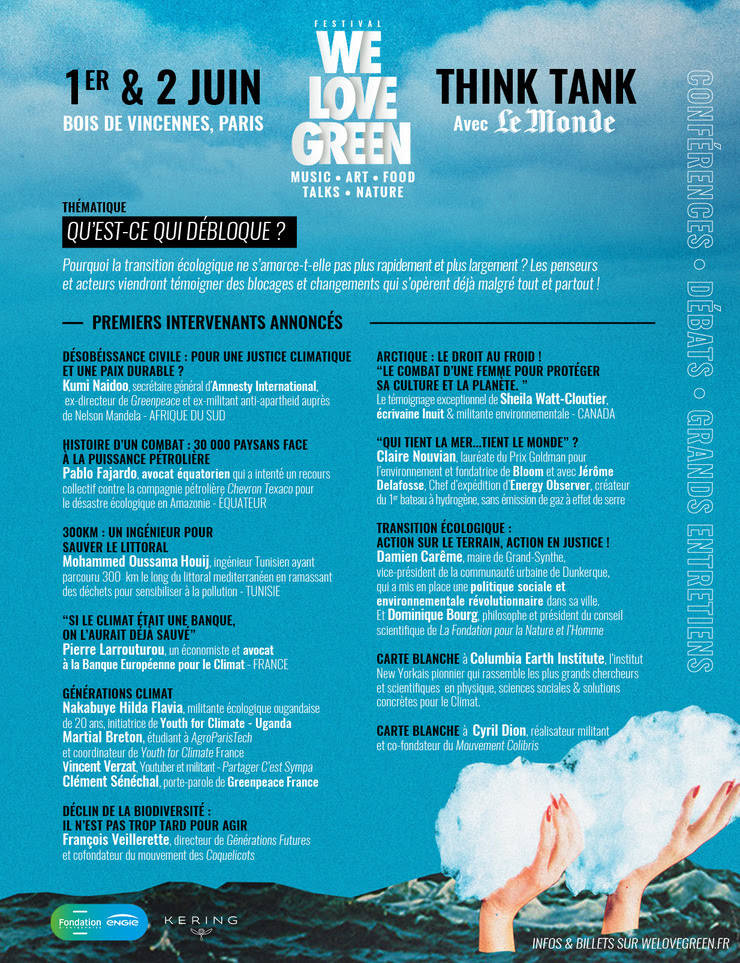 To raise awareness of marine pollution, engineer Mohamed Oussama Houij walked the 300 km-stretch of Tunisian coastline picking up all the rubbish along his way.

With Claire Nouvian, winner of the Goldman Environmental Prize and founder of Bloom, and Jérôme Delafosse, expedition leader of Energy Observer and creator of the first hydrogen vessel with zero greenhouse gas emissions.

With Kumi Naidoo, Secretary General of Amnesty International and former head of Greenpeace and anti-apartheid activist.

With Martial Breton, AgroParisTech student and coordinator of Youth for Climate France

With Vincent Verzat, YouTuber and activist 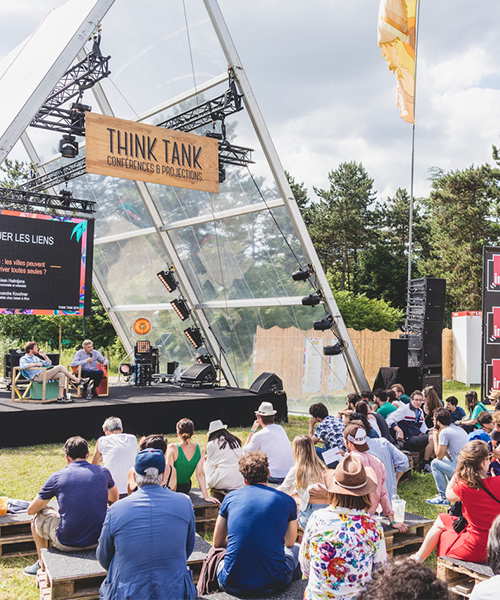 With Pablo Fajardo, the Ecuadorian lawyer who lead a class-action lawsuit against petrol company Chevron Texaco for the environmental disaster caused in the Amazon.

With Pierre Larrouturou, economist and lawyer who is calling for a European Climate Bank to be created

Hear Sheila Watt-Cloutier’s wonderful experience as the environmental activist and author shares her knowledge and insight into the Inuit way of life.

With François Veillerette, director of Générations Futures and co-founder of the Coquelicots movement

With Damien Carême, vice-president of Dunkirk urban community, who has put in place revolutionary social and environmetal policies in his town. And Dominique Bourg, philosopher and president of science committee at Fondation Pour la Nature et l’Homme. 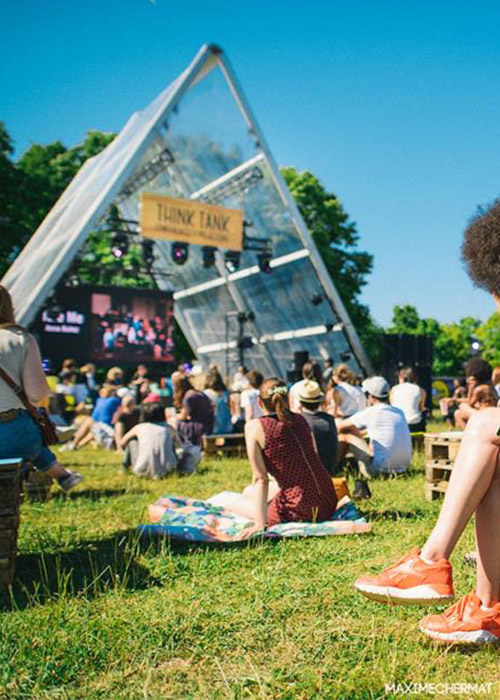 For more details, news, information on the speakers & schedule times, click below. 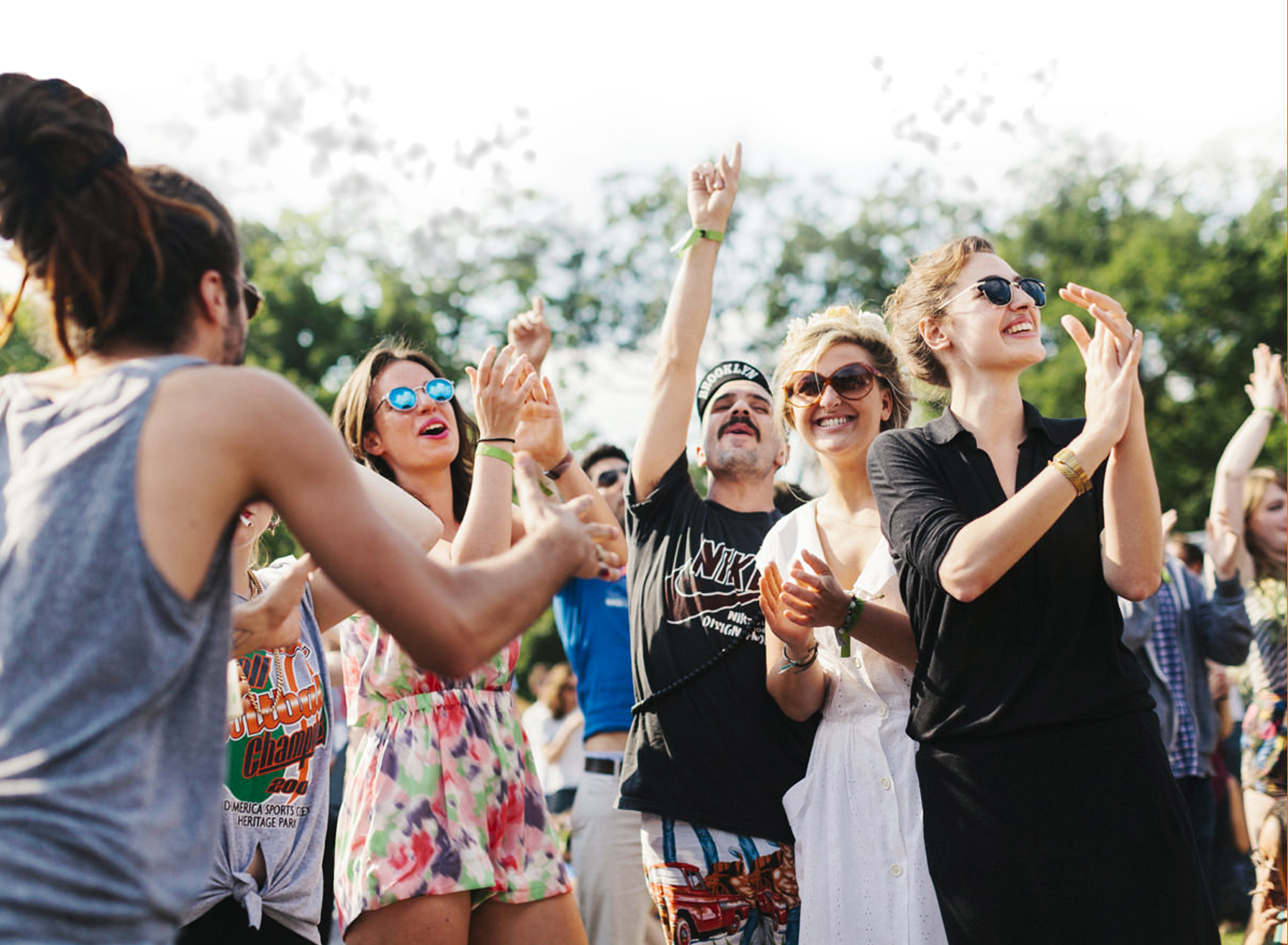